The Low-background Laboratory for Nuclear Physics (LBLNP) is a part of the Institute of Physics, University of Belgrade. It is situated on the right bank of the Danube, in the Belgrade borough of Zemun. Research within the LBLNP is related to and done in the various fields of nuclear physics, mainly cosmic-ray physics, high energy physics, nuclear spectroscopy, radioecology, and physics of hot dense plasmas, as well.

The LBLNP was founded by Dr. Radovan Antanasijević. Honouring his legacy, members and friends of the LBLNP decided to name it after its founder and longtime head.

Head of The Low-background Laboratory for Nuclear Physics is Dr. Vladimir Udovičić. 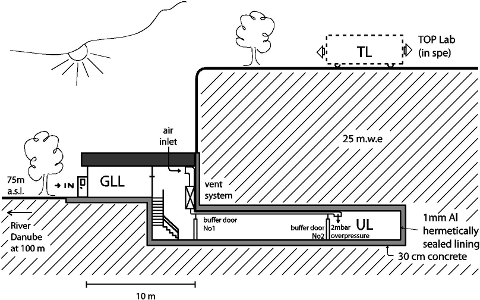 One is the low-level and cosmic ray laboratory which is dedicated to the measurements of low radiation activities and to the studies of the muon and electromagnetic components of cosmic rays at the ground level and at the shallow depth underground. The other is the plasma focus laboratory with a focus in research of nuclear processes in hot dense plasmas generated by pulse electrical discharges. Apart from this, the LBLNP has a laboratory for chemical analyses which is, along with office premises, within the main Institute’s building.
The low-level and cosmic ray laboratory is located at 75 m a.s.l., at latitude 44° 51′ N and longitude 20° 23′ E; its geomagnetic latitude is 39° 32′ N and geomagnetic vertical rigidity cut-off is 5.3 GV. It consists of ground level part of the laboratory (GLL) and underground part of the laboratory (UL). The GLL is situated at the foot of the vertical loess cliff, which is about 10 meters high. The UL is dug into the foot of the cliff and is accessible from the GLL via the 10 meters long horizontal corridor. The overall area of the UL is 63 m2, while the working part is 45 m2, with three 12 m2 niches for independent experiments. The top laboratory (TL), which will be situated on the top of the cliff just above the UL, is still in planning phase.

Low-Background LaboratoryThe overburden of the UL is about 12 meters of loess soil, which is equivalent to 25 meters of water. The walls are made of 30 cm thick reinforced concrete and covered with the hermetically sealed Al lining 1 mm thick, to prevent the radon from the soil to diffuse into the laboratory. The low-level laboratory is equipped with an air ventilation system which keeps 2 mbar overpressure in the UL, in order to minimize radon diffusion through eventual imperfections in the Al lining.